The curved road in 100 kilometers length between the provinces of Gumushane – Trabzon which takes 1-1,5 hours will drop 40 minutes following conclusion of the new tunnel construction.

In the scope of new double-way Zigana Tunnel Project of which construction is continuing and 1.5 kilometers of 14,5 kilometers have been excavated along with Trabzon-Gumushane highway, will feature the longest tunnel of Europe and second longest of the world. The works of the tunnel, of which construction began in April 2016 at the side of Gumushane and in August 2016 at the side of Trabzon, are continuing. The double-way tunnel will be in 14,5 kilometers length. The Zigana Mountain will be passed through the new Zigana Tunnel, which enters altitude of 1015 meters through Basarkoy Valley and climbing to the altitude in 1,212 meters height with 3,3% angle and then going down with 0.85% angle with altitude in 1,212 meters height through Kosdere Valley. While current Zigana Tunnel is passed through altitude of 1,800 meters, as for the entrance of the new Zigana Tunnel will be nearly 800 meters lower altitude and will be left by nearly 560 meters low altitude. During the Zigana Tunnel 3 shaft-structure will be constructed for airing. In the structure of the project between Gumushane- Trabzon, the road will shorten 8 kilometers, 2,7 million cubic meters excavation, 800 thousand cubic meters concrete will be made. In 100 kilometers length curved road between Gumushane – Trabzon which takes 1-1,5 hours will drop 40 minutes following construction of the new tunnel. Tunnel will make up a tourism potential Okay Memiş, Governor of Gumushane, in his statement said great services had been accomplished in the last 14 years that unseen in the previous period in Turkey, adding that the 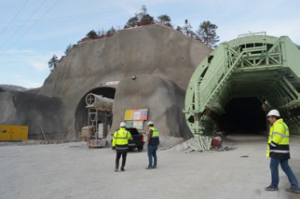 province of Gumushane took its share from those services. Governor Okay Memis highlighted when the tunnel was completed would make up a tourism potential by itself. He continued, “We will also reach Trabzon port and Trabzon airport via the new Zigana Tunnel. The project price of the tunnel is TL550 million. When it finished, we predict its cost might reach by TL1 billion together with the connection roads and other things. The construction of the tunnel is aimed to finish in the shortest time.”