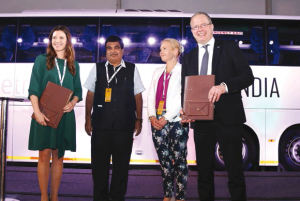 Scania and the development financier of the Swedish state Swedfund are establishing a partnership to develop the production of biogas as an automotive fuel in the Indian city of Nagpur, which is located in the state of Maharashtra and has 2.5 million inhabitants.

The biogas will be produced from digested sludge from one of the city’s wastewater treatment plants in collaboration with local companies. Nagpur is participating in the Indian Government’s initiative to improve the environment and transport systems in the country’s 100 largest cities.

The agreement between Swedfund and Scania was signed at today’s inauguration of Scania’s bus manufacturing facility in India by the companies’ chief executives Anna Ryott and Martin Lundstedt in the prescene of Sweden’s Minister of infrastructure , Anna Johansson and Shri. Nitin Gadkari, Honourable Minister of Road Transport and Highways of India “This is a Swedish venture, which in a sustainable and profitable manner can generate many new jobs and contribute to India’s shift towards renewable fuels. Biogas is the fuel of the future, which will contribute to solving India’s huge pollution problems while taking a comprehensive approach to the major environmental challenges,” says Swedfund’s CEO Anna Ryott.

The plans for the biogas project were presented today in connection with the inauguration of Scania’s bus facility in Narasapura in Karnataka state. Today India occupies third place in terms of global carbon dioxide emissions, and these emissions are expected to double in the next few decades. In line with the country’s continued urbanisation, the quantity of waste produced in the cities is also increasing.

“Scania has vehicles and technologies that can contribute to this shift, here and now. We see great opportunities for Sweden as a country to lead the development towards sustainable cities in the world in general and in India in particular. For this reason, we are extremely happy to be able to take this step together with Swedfund” says Scania’s President and CEO Martin Lundstedt.

Initiative in 100 cities with international support The Indian Government led by Prime Minister Narendra Modi is working actively to improve the environment and accessibility in 100 large cities in the country. The initiative is called Smart Cities. The Government is also approaching international companies that want to invest in technologies and systems that can promote the development of sustainable cities.

Producing biogas from waste in major cities and residual products from agriculture represents an important part of the solution to India’s problems with air pollution, waste management and the cost of imported energy. Swedfund, which is owned by the Swedish state, offers risk capital, competence and financial support for investments in growth markets in Africa, Asia, Latin America and Eastern Europe. The task is to reduce poverty by creating sustainable business, which contributes to economic, environmental and social development. Since 1979, Swedfund has been an active, responsible and long-term investor in more than 230 companies